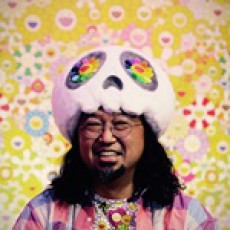 Takashi Murakami was born in 1962 in Tokyo, Japan. He studied at Tokyo University of the Arts, Japan, (formerly, Tokyo National University of Fine Arts and Music), where he received his B.F.A. in 1986, his M.F.A. in 1988, and his P.h.D. in 1993. He founded the Hiropon factory in Tokyo in 1996, which later evolved into Kaikai Kiki, an art production and art management corporation. In addition to the production and marketing of Murakami's art and related work, Kaikai Kiki functions as a supportive environment for the fostering of emerging artists.A lightning rod between different cultural valencies (high/low, ancient/modern, oriental/occidental), Takashi Murakami has stated that the artist is someone who understands the borders between worlds and who makes an effort to know them. With his distinctive “Superflat” style and ethos, which employs highly refined classical Japanese painting techniques to depict a super-charged mix of Pop, animé and otaku content within a flattened representational picture-plane, he moves freely within an ever-expanding field of aesthetic issues and cultural inspirations. Parallel to utopian and dystopian themes, he recollects and revitalizes narratives of transcendence and enlightenment, often involving outsider-savants. Mining religious and secular subjects favored by the so-called Japanese "eccentrics" or non-conformist artists of the Early Modern era commonly considered to be counterparts of the Western Romantic tradition, Murakami situates himself within their legacy of bold and lively individualism in a manner that is entirely his own and of his time.

Sitting Pandas Here And There

Atop A Ball Of Flowers, A Panda Cub Sleeps Soundly

Atop A Ball Of Flowers, A Panda Cub Sleeps Properly

A Swinging Circus Hold Peace And Darkness In Your Heart

The Future Will Definitely Smile! Surely!