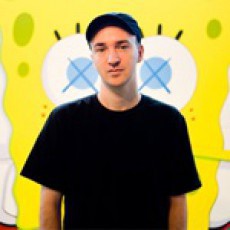 KAWS was born Brian Donnelly in Jersey City, New Jersey. He graduated from the School of Visual Arts in New York with a Bachelor of Fine Arts in illustration in 1996. After graduation, KAWS briefly worked for Disney as a freelance animator painting backgrounds. He also contributed to the animated series 101 Dalmatians, Daria and Doug.He began his career as a graffiti artist growing up in Jersey City, New Jersey. Later moving to New York City in the 1990s, KAWS started subverting imagery on billboards, bus shelters and phone booth advertisements. These reworked advertisements were at first left alone, lasting for up to several months, but as KAWS’ popularity skyrocketed, the ads became increasingly sought after. In addition to New York, KAWS has done work in Paris, London, Berlin and Tokyo.In the late 90s, KAWS began to design and produce limited edition vinyl toys, "an instant hit with the global art toy-collecting community," especially in Japan, where this genre is well respected and widespread. More toys and later clothing were made for Original Fake, a recent collaborative store with Medicom Toy, in the Aoyama district of Tokyo where an original limited edition product is released each week. KAWS has also participated in other commercial collaborations with Nigo for A Bathing Ape, Jun “Jonio” Takahashi for Undercover, Michael "Mic" Neumann for Kung Faux, snowboard projects with Burton, and sneakers with Nike and Vans. His most recent collaboration was with Comme des Garçons. As of August 2010, it is reported that Kaws has designed a limited edition bottle for Dos Equis, a Mexican beer brand. The bottle is slated for release in Mexico in early September 2010.KAWS’ acrylic paintings and sculpture have many repeating images, all meant to be universally understood, surpassing languages and cultures. One of KAWS' early series, Package Paintings, was made in 2000. This series, entitled The Kimpsons, subverted the famous American cartoon, The Simpsons. KAWS explains that he "found it weird how infused a cartoon could become in people's lives; the impact it could have, compared to regular politics." In addition, KAWS has reworked other familiar icons such as Mickey Mouse, the Michelin Man, the Smurfs, and SpongeBob SquarePants.Through all of his projects, KAWS has successfully blurred the line between fine art and mass-produced merchandise. He uses his products to allow his imagery to infiltrate a larger audience than that of the fine art world. The artist is currently an active member in both the commercial and fine art communities. Recent solo exhibitions include OriginalFake at the Bape Gallery in Tokyo (2003) where his sculpture "Wonderful World" sold for $400,000.[citation needed] KAWS has been periodically showing both paintings and products at Colette in Paris since 1999. His work is included in the traveling exhibition Beautiful Losers, which started at the Cincinnati Contemporary Art Center and will be traveling through 2009 throughout the US and Europe, including his largest museum show to date, which will be held at the High Museum of Art in Atlanta, Georgia.